Posted on February 5, 2020 by Julia Cameron Filed as Inspiration, Julia's Classroom and tagged

During our work lives, we customarily received criticism from our bosses and sometimes our colleagues. Many of us endured yearly or quarterly reviews, and we took in their frequent negativity as part of our job. Retired, we find ourselves continuing to receive negative feedback, but instead of coming from our employer, it is the product of our own Inner Censor--that internal voice that tells us we are not doing well and that we could do better. Our Censor attacks us from out of the blue and its voice has a damning certainty. We could have, and should have, done better, states the Censor, and we often repeat this criticism to ourselves. In dealing with the Censor, it helps to know that its negative voice is not the voice of reason. Rather, it is a caricature villain who will always be on the attack until we stand up to it and say, “Oh— that’s just my Censor.”

For many of us, the negative voice called the Censor is a formidable foe. We have often spent many years buying into the Censor’s negativity, believing what it says and using that negative belief to talk ourselves out of projects and delights. The scenario goes something like this:

Afraid of feeling foolish, we often back down from our dreams. We take the voice of the Censor as the voice of reason. In reality, it is the Censor’s voice that is foolish, talking us out of joys and future rewards.

The Censor is typically sarcastic. It pokes fun at our ideas and encourages us to give up. The Censor speaks in a “schoolyard bully” tone and often uses simplistic reasoning. Upon closer examination, we discover that our Censor is often unreasonably negative— in fact, our Censor may criticize our best ideas. To the Censor, any original idea seems dangerous. Let’s say our creativity is a verdant meadow. The Censor believes itself to be in charge of the animals that enter the meadow. It likes known, familiar beasts— an idea that’s like a cow. But say a novel idea strives to enter the clearing— say, a zebra. The Censor will begin its attack, poking fun at the very sight of a new idea. And so it rants and belittles: “Stripes? Who ever heard of stripes? Stripes look foolish.”

It does no good to say soothingly, “It’s a zebra. Zebras have stripes.” The Censor doesn’t want to hear it. “Send in a cow,” the Censor commands. And, unless we back down, the Censor will continue its shrill attack on zebras. It’s important to realize that the Censor saves its most vehement attacks for our most original ideas.

from It's Never Too Late to Begin Again 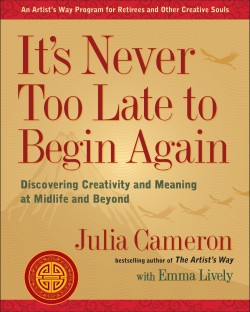