Yesterday afternoon, I went to my friend Robert Stivers' studio. It is a loft space filled with giant prints from Robert's portfolio. The prints were beautiful and exotic. Robert was to take a new headshot for me, and I, too, hoped to look beautiful and exotic. I dressed all in black-- my usual attire. Robert shot me on his terrace with natural light. I had to focus not to squint in the sun.

"Maybe just a little. You're doing fine," Robert would reply.

It felt luxurious working with a photographer of Robert's caliber. He shot five rolls of film-- he preferred working an old-fashioned way rather than digital. He would shoot on film and scan the resulting images digitally. This allowed him to have more control.

"Shall I try some with my shawl?" I asked him.

All told, we spent about a hour shooting, capturing the light that filmmakers call "Golden Hour." 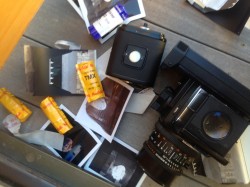