An excerpt from “Love in the DMZ”

Posted on May 4, 2014 by Julia Cameron Filed as Julia's Fiction and tagged

Love in the DMZ was written during a long separation from the man I loved. I questioned his fidelity but loved him passionately. Written to be read either as a play or a novella, the letters proved cathartic.
Performed as a play in letters, this piece is very well served by the simplest of productions: Two lecterns, set opposite each other on an empty stage. The script contains no lighting cues, as those are to be created at the discretion of the director and creative personnel. Some productions may wish to suggest visually the locale of each of the writers. In this case, the wife’s locale contains the suggestion of furnishings for a Midwestern living room and a window out toward the garden and yard. The window features cobalt shutters, as indicated in the script. Additionally, sound effects with light American songbirds may be added. The husband’s Vietnam locale contains the suggestion of a tent flap and a cot. Sound effects of jungle noises are another valid addition.
It should be noted that ideas such as rear projections of Vietnam memorabilia tend to distract from the emotional timbre of the letters proper. It is the author’s strong belief that less is more in the staging of this work.

Dear Wife:
Just the facts, lady. Just the facts.
This country is 850 miles long. Its widest point is 310 miles wide. Fifty-five million people live here, but we’re working on that. China lies to the north. Laos, Cambodia and the Gulf of Thailand lie west. South and east are the South China Sea and the Gulf of Tonkin. Mountains and forests dominate in the north. Plateaus step down to the south. There are two river deltas, the Red River and the Mekong. In the mountains, they grow rubber and tea. In the deltas, they raise rice. Lots of rice.
What else?
One-third of the total land area is deciduous trees – evergreen and subtropical deciduous forests – oak, chestnuts, pine, ebony and teak. Bamboo is widespread. There are mangrove forests along the tidal coastal plains. The plateaus look like what I think of as Africa – savannah grasses and shrubs.
And more?
Cobras, sorry to say. Pythons. Tigers, elephants, wild oxen, wild pigs, bears, deer, jackals, gibbons. Oh, yes, crocodiles.
What the people eat is mainly rice, seafood and shellfish harvested from inland waters and the South China Sea. What we eat, on the other hand, is as much of America as they will fly in to us, everything from Spam to Jiffy to rivers of Coke.
And where am I?
That, right now, I can’t tell you. I will say it is very green and not unlike Kansas as to flat. That’s all I’m allowed to tell you. Maybe more.
And you?
Aren’t you the beautiful woman living in the house with those “interesting” cobalt blue shutters? What were we thinking of? In my case, your eyes.
My “men” are boys. Their musical tastes do not run to Mozart. They love the Doors, Hendrix and Motown. There’s something about rock and roll that speaks to war – or vice-versa. I have a whole theory, more on which later. Right now, it’s lights out – meaning you’re probably getting the boys off to school. I like the idea it’s broad daylight for you when I’m sleeping. Somehow, that makes me feel you’re safer.

When I’m awake, you’re asleep. Pretend I still guard over you, my darling. I guard you with my heart.
Your husband.

Dear Husband:
You’ve got your geography all wrong. You cannot be in a place with cobras and pythons. I am terrified of snakes. You cannot live among crocodiles, tigers and bears. The boys think it’s thrilling. I think it’s a mistake. Where you live is in my heart. Every time I look there, I see you. You are safe and protected. You complain a little about claustrophobia, I can understand that, but the accommodations are really very nice. That’s where you live. Believe me.
YOUR WIFE!!

Dear Wife:
You’re in my heart, too.
Your husband.

Dear Husband:
Last night I collapsed in a heap, sobbing. I did it in the bedroom, thankfully--I didn’t want the boys to see me. It was a lot of little things. The back door came off its hinge again – they slam it so, running out to their swords and guns. The oven door came off its hinge. (No, I did not put my head in it, though I miss you.) The car wouldn’t start. The TV is doing something funny. The real problem is that the boys are getting wild without you. They just don’t listen to me. I ended up screaming, “You will come in here. Now. It’s dark. If your father were here –”
“He’s not, Mom,” Sean said. “Wake up and smell the coffee.”
That’s what did it. The rest of the list is all mechanical. What’s broken is my heart. We all need you, which you know. Which you must know. Without you, we break, not just our things.
Your loving pathetic wife.

Dear Pathetic Wife:
You’re stronger than you know. And, weaker than you thought, I’m actually glad to know you collapsed, weeping. Of course, the real fear is that we are expendable, replaceable. You are not replaceable.
As for me, hire a handyman. Call my convenient brother. He loves to play the hero in small ways. He’ll tell you I fixed the door wrong the last time. Tell the boys this, “Your father says you are to help me and take care of me.”
Men, even little men, love to do those things. Which explains what I’m doing here, I’m sure. This war is a story I’ve heard all of my life. We are fighting so things will be safe. Safe is the happy ending.
Husband (yours). 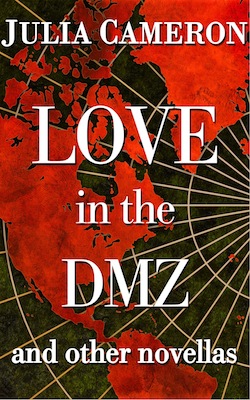