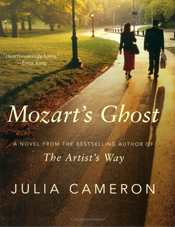 Cameron, the author of more than 25 books and probably best-known for The Artist’s Way, brings her fans a twist on a stereotypical romance that strikes a chord with those willing to immerse themselves in a world of ghosts. Anna Chester is a New York transplant from the Midwest trying to overcome loneliness and support herself by substitute teaching while pursuing a sideline career as a medium. When Edward Appleton, a talented pianist who is practicing for a competition, moves in downstairs, Anna is frustrated that the piano music interrupts her communication with the other world. Her anger is amplified even more by frequent visits from the ghost of Mozart, who adores Edward's playing and encourages Anna to pursue a romantic relationship with the musician. The romance blossoms in fits and starts, and Anna is reluctant to tell Edward about her speaking-with-the-dead abilities out of fear he will no longer want a relationship. While this delightful novel has a heavy supernatural presence, it's also about loneliness and fear, two things that many readers will understand-even if they don't believe in ghosts.
Amazon | Barnes & Noble | Macmillan | Powells | BAMM | IndieBound